138: Glenn Gale – From breakfast radio to the cancer shift 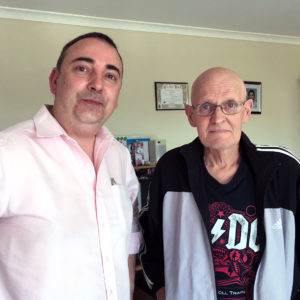 UPDATE: On Thursday, July 14, 2016, Glenn Gale finally passed away after a gritty and committed fight with cancer. RIP Glenn Gale.

Tonight, we spend some time reflecting on his life as the ‘morning DJ’ and get insights from him into the realm of being confronted by cancer and the way he has chosen to deal with it.

You will meet a man who has few regrets but who would dearly love more time to be with the people who dearly love him!

For this week’s show, we went non-alcoholic to match Glenn’s current diet, so our SA Drink Of The Week is Ashton Valley Fresh with their Pear Juice.

In IS IT NEWS, Nigel tests Steve and Glenn on sea creatures of Victor Harbor.

Max Martin has his Made to Move Minute; Pain Series Pt1. Correlation Between Images (x-rays) And Pain

We have a full throttle Adelaide Visa Council.

Music is Holding Up The Sky by Andy and Marta