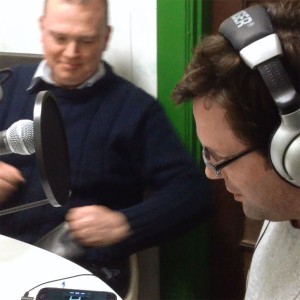 [Update March 2015: For episode 80, we renamed ourselves to The Adelaide Show]

We have finally released our original theme song for Another Boring Thursday Night In Adelaide.

It was collaboratively produced by our team with the majority of work done by Brett Monten.

Colin is pictured laying down backing vocals while Brett Oom-Pahs in the background!

The whole concept of a yodel came from a Billy Connolly show Brett saw in Adelaide, where Billy walked out on stage and opened with “Ah Adelaide… I love this place – you can’t say it without turning it into a yodel… Adelaide-eee-hoooooo”.

This stuck in Brett’s mind and inspired the chorus.  We are hoping it will inspire many pub choruses around Adelaide as our podcast extends its reach into the nooks and crannies of our city and our state. In fact, we’ve set a goal to record our guest presenters and layer them on the chorus when we can.

Steve drafted some initial lyrics that floated around in Brett’s head and eventually came out as they did.

We think they will evolve over time.

Here are the first couple of verses:

This is the first version of the song recorded by Brett Monten with additional vocals from Steve Davis and Colin Long.

We expect to continue recording revised versions over time.

If you are really game, you can listen to the whole version of the current theme song here: