Episode 012: Of Kings And Wangs 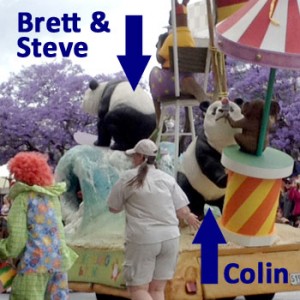 We tried, we were conquered.

At the 2013 Credit Union Christmas Pageant, we snuck IN to Wang Wang (Brett and Steve) and Funi (Colin), in an attempt to record this week’s show live from the float.

But cramped conditions and guards evacuated Steve and Brett, while friction had Colin stuck in his fibreglass panda for, well, we still haven’t seen him …

Regrouping in our usual studio, we recorded the rest of the show with a new Nigel, Nigel Hey.

He came to our attention due to being photographed in the Victor Harbor Times and credited with being a winemaker at Rosemount Wines. While he works for the parent company and with Steve’s wife, Nardia, he will explain the truth behind the headline in the show.

Plus there is all the usual goings on with great wine, great music and some conversation to keep you company on your newly streamlined Adelaide commute through Britannia Roundabout!

Shout outs: Steve sends a cheerio to the Public Relations Institute of Australia – he has been engaged as the official blogger for their national conference starting in Adelaide this Sunday. Nigel says hello to Helen Kordina, a friend of his who works as a radio producer for Triple M in Adelaide. She gave him some radio tips before joining us. Brett sent a cheerio to Andrew and Trina, friends of his celebrating their 23rd wedding anniversary.

Wine tasting: We had the McLaren Vale Bushing Festival winner, a 2012 Rosemount Estates District Release Cabernet Sauvignon from McLaren Vale. This wine had an engaging nose and delivered full bodied cab sauv on the palate. Unbelievable value at $19 a bottle – if you can get it. Many, many thanks to Rosemount’s John Gledhill for securing us a bottle to toast our late patron, Queen Adelaide. Tasting notes.

Stories without notice: Steve led a discussion in the habit of Adelaideans to keep the good things about our city quiet. Brett was all heady about Ingress being made available without an invitation (that is his geek game in which you use a map on your phone to work with other people on imaginary teams to ‘storm the virtual lantern’ in cities around the world. Nigel revealed plans for a replica of Britannia Roundabout to be built next to the real thing. Yes, we kid you not!

Adelaide’s Yesterdays with Colin: Not on the show this week.

Brett’s Musical Pilgrimage: Gorilla Jones and All I Have Is My Name.