059 – Red moon over Adelaide and burqas below 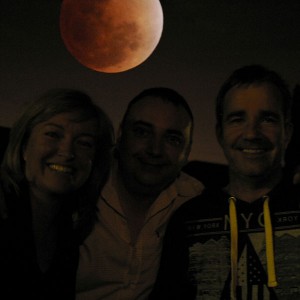 Charlie, Steve and Nigel under the red moon

UPDATE: Charlie-Helen Robinson has issued a statement to clarify a comment she made in this week’s podcast about taxpayer money possibly being used to print election material for some candidates in the local council elections in the City Of Charles Sturt. She says she made a ‘boo boo’ and apologises unreservedly. 13/10/14

This week, Adelaide joined the world in observing a full, lunar eclipse and we are sure the lunar effect affected this podcast episode.

Not only did Nigel get corrected by his wife regarding the time the eclipse will happen (and he’s the science one), but we stumbled into some interesting subjects that Adelaideans rarely talk about until way after dark.

However, we were joined by a prominent Adelaidean, Lynda Pearl-Wilson, a former dress designer, whoe gave us a peep under the controversial burqa.

She was the dressmaker to a Serbian Muslim woman in Adelaide and will reveal some unexpected requests and beliefs that put paid to the vile, fear-stoked, bitterness that is given full voice in the mass media whenever burqas and other forms of head dress and body covering are mentioned.

It is Mental Health Week and tomorrow is World Mental Health Day, so local advertising guy and committed vegan, Tom Williamson, who has also appeared on our podcast with his Vegan Australia Day BBQ, will combine wine and mental health by sharing a gorgeous selection of Bathe Wines available to all of us at a special price while also raising money for the Black Dog Institute for their research into mental illness.

This week is also the last of our play-at-home editions of Is It News and it takes us to the Western Suburbs. Good luck.

Local radio legend, FIVEaa’s Andrew Reimer, drops by with a recording session of announcements for our podcast. NOTE: These were recorded live on his radio program last Sunday night.

And not only does Phil Paviour provide us with his newest song, he also helps us pronounce his surname!