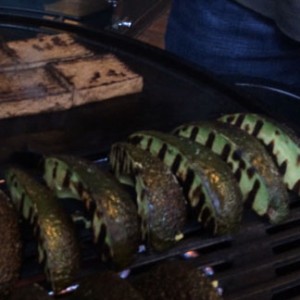 NOTE: There is an unwanted hum during the opening 30 seconds and then for 14 minutes from the 24 minute mark to the 38 minute mark, due to a wireless microphone we were using on our road trip. I hope this does not detract from your enjoyment of our discussion. Steve

Tom from the Adelaide Chopping Board cooked up a Vegan storm that left us staggering out into the crisp, Adelaide Hills night, stuffed to the gills with great food and his special port.

From crispy, Kale chips to perfect houmous, from char-grilled avocado salad to Japanese Tofu burgers with roasted capsicum mayo, finished off with Chia and Coconut pudding and Anzac Biscuits, Tom left no stone unturned in preparing a pathway to Vegan heaven.

BONUS: See the behind-the-scenes BBQ video at the bottom of this page.

Given that Australia Day is on the doorstep, Steve leafs through the South Australian Advertiser from Australia Day, 1869 – was there an Advertising Standards Bureau back then? We think not.

Wine from Rosemount and music from The Brouhaha cap off the night as we wander away with some Anzac Biscuits.

Shout outs:  Steve notes that Australia Day in Adelaide will feature Stage 6 of the Tour Down Under, the Australia Day Parade through the city centre from 6pm, International Cricket Australia vs England at Adelaide Oval, and then fireworks from the roof of the Adelaide Convention Centre.

Stories without notice: Steve: Farmer friend, Kenny from Murray Bridge, was talking about Silo Bags. They are about 200 feet long, 3m diameter, and hold about about a tonne of grain every foot. Grain kept on the ground in these bags – white on outside keeps out heat – 3 year lifespan. Mice bury underneath but don’t do damage because it is so tight. Or they choose black on outside for silage – this is where you deliberately heat up the grain such as green corn – breaks down into a black feed which cattle love. Brett: His time in Thailand.

Stories From The Street: Nobody was on the street this week.

Adelaide’s Yesterdays with Colin: Standing in for Colin this week, Steve went through some highlights from the South Australian Advertiser, Australia Day 1869. Click through for details.