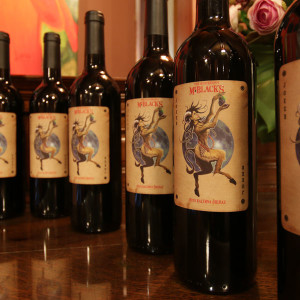 The following, The Joker 2013 Kalimna Shiraz tasting notes, came from our opening night of the Adelaide Fringe live recordings at the Arkaba Hotel.

Thanks to the generosity of Charlie Black aka The Mysterious Mr Black, we launched our live series in the grandest of style with The Joker 2013 Kalimna Shiraz as the South Australian Drink Of The Week.

Upon his first sip of The Joker, John Schumann turned and said, ‘I want a dozen.’

Our other guest, David Minear, chair of the Adelaide Fringe and a fellow wine creator, said, ‘I’m a red wine addict and this could be high on my list of abuse.’

Steve noted how well balanced the wine is with ‘everything integrated perfectly. We have a little tannin there and some lovely, prominent fruit that marches down the centre of your tongue and then leaves no trace. This is a very polite group of wine-tasting molecules as they make their way down to your gullet.’

Nigel said, ‘this is a pretty good Shiraz; strong berries, good aftertaste, and the top of the palate is where you get hit with it which is pretty nice.’

He also pointed out how FEW bottles of this wine have been made – 768. That’s bottles, not cases.

This is superb wine and wine lovers would do well to seek out Mr Black’s wines by emailing [email protected] to get pricing AND by ordering half a dozen, Charlie says he will give Adelaide Show listeners a bonus bottle of his Adelaide Hills Chardonnay.

Charlie’s grandma, Betty Bannear was a collector, (not a hoarder). At one stage she had the largest shell collection in the Southern Hemisphere. She also collected Joker cards which Charlie began collecting and then he inherited her collection.

He was working at Leeuwin Estate (in WA) as Leading Hand in the vineyard and was day dreaming about one day returning to the family winery in the Barossa and making a small batch wine from the same vines every year to try and showcase seasonal variance, something he is really fascinated by.

That’s when the idea struck him, that a Joker playing card would make for a great label for this wine as every pack of cards has a different Joker and it can be considered a wild card. And thus, the ‘Fool Deck Series’ came to life.

According to Charlie, the magic of wine happens in the vineyard, so that’s his focus.

Did you say Kalimna Shiraz?

You might be familiar with Penfolds’ Kalimna Shiraz without realising Kalimna is not a Penfolds vineyard, it is a unique sub-region at the Northern end of the Barossa.

Through the relationships Charlie’s father built with growers over the years he has been lucky enough to get his  hands on three rows of this fruit, which the grower lets him prune and nurture through to picking, which allows him to dance with it all the way from dormancy to bottle.

It’s not the size that matters

As production volumes are small with The Mysterious Mr Black wines they can only be found in a few of Charlie’s favourite restaurants and bottle shops.

Nick at Chloe’s Restaurant has been a fantastic supporter of The Mysterious Mr Black, stocking all of ‘The Fool Deck Series’.

Charlie wants to get to know YOU, that’s why he is encouraging you to join his mailing list called ‘The BlackMail Archives’. Over time he wants to sell most of his booze through this list only, encouraging a ‘deal directly with the producer’ experience.

Here is our live tasting, starts about seven minutes in.