In this episode we ‘swap jokes and company’ as we explore the worlds of two, great, Adelaide mates, David Minear and John Schumann.

In surfing parlance, tonight’s conversation is like a bombora that we surf all the way back safely to shore!

And despite all those topics, we hardly scratched the surface with these guys. We hope to get them back one day!

IS IT NEWS picked up on the surfing theme, giving David a slight advantage, given his business, Bombora, is a haven for surf music recording in Australia. We didn’t even dip our toes into that water tonight.

Our wine this week is stunning: the 2013 Joker from The Mysterious Mr Black

And we have an appeal in the Adelaide Visa Council as well as a sticky situation for the Adelaide Fringe Ambassador, Julian Clary

But we started with David Washington from InDaily with his midweek news wrap, Talk Of The Town

Musical Pilgrimage (Reuben Gore has a great video for this week’s song. Thought we’d share it): 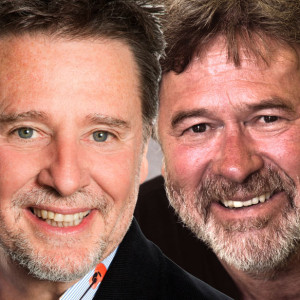 NOTE: The wording below was used to promote this event for The Adelaide Fringe in 2016. At the time of publishing this page we have THREE more live recording shows over the next three Tuesdays. Details all here – please come to at least one. Only 25 seats per show.

Come along to our first Adelaide Fringe live recording on Tuesday night, February 16, 2016, from 7-9pm at The Arkaba Hotel, for an intimate and fun evening of conversation with two great Adelaide mates, John Schumann & David Minear.

John Schumann is well known for his work with Redgum, a band that produced the song One More Boring Thursday Night In Adelaide. That song was part of the mix of ideas and motivations that led our podcast into existence; we were sick of people labelling Adelaide as boring.

When that infamous song was produced in 1978, there were some interesting observations about life in Adelaide but the problem with the ongoing meme of Adelaide being boring is that time has moved on and there is a yawning gap between ideas formed in the past and the reality of a city where new ideas and ventures are pulsing through the streets, suburbs and regions. Just look at our 129 previous episodes for evidence.

We’ll discuss this with John, as well as draw out some other South Australian references from his Redgum back catalogue and see which still hold up and which have had to yield to time and change.

But given our podcast is just like a chat among friends over a glass or two of red, so too our first night will conjur up the essences of mateship as we also interview one of John’s best mates, David Minear.

David Minear is not only Chair of the Adelaide Fringe, he owns Australia’s only surf music label, Bombora, and is often referred to as ‘the ad man’.

Right on stage during our very hip ‘podcast’ recording, we’ll be keen to learn about his exposure to other ‘multimedia’ growing up (his dad ran a drive-in theatre over the back fence’) and how that shaped his career goals and decisions.

David also held the steering wheel at Y&R, the advertising agency, back in the 80s and 90s, when Adelaide produced Mitsubishis. Perhaps he might end up directing the short, improvised promo video for the episode on the night?

And we’ll explore how friendship happened through life in Adelaide and South Australia through the 60s, 70s and beyond. As well as working out how a vocal critic of rampant consumerism could be friends with someone working on the ‘dark side’ in advertising.

When you click through to buy tickets from the Adelaide Fringe website, make sure you choose Tuesday, February 16. There are only 25 in total.

PS As the night gets closer, this page will also become the running sheet, so you’ll get a sneak peek at what we plan before we record a show.