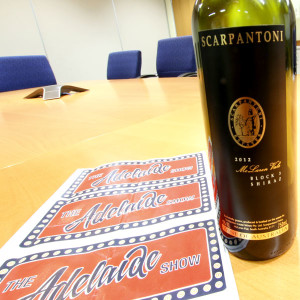 In episode 126, we created these Scarpantoni 2012 Block 3 Shiraz tasting notes for the SA Drink Of The Week segment.

It was an interesting week because our guest was Lincoln Size, chief executive Cancer Council SA, and he had to make an exception to allow us to drink the wine in their building (it has an alcohol ban).

Lincoln made the point that Cancer Council SA is not against alcohol but rather it is for the responsible consumption of it within health guidelines.

This means no more than 1-2 standard drinks per day.

And this is what made the Scarpantoni Block 3 Shiraz such a perfect drink for this show: it is good and it pour a heap of quality and value into those 1-2 standard drinks.

We noted the crimson hue of the wine, the vibrant berry notes and the light to moderate tannins.

In many ways, this is classic McLaren Vale Shiraz, although Steve did taste blackberry at one point, something more typically associated with Cabernet Sauvignon. He accidentally said blueberry during the recording, he meant blackberry – we think he was nervous, drinking in front of Lincoln Size!!

Have a listen to our live tasting, it happens about eight minutes in.