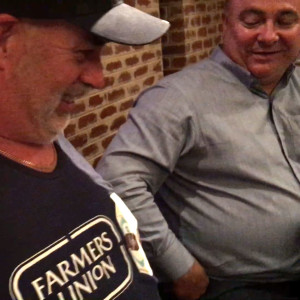 Is it an iced coffee or it’s nothing? And must that be a Farmers Union or can it be a Nippys or some other brand?

In one of the markets that surprised the world and had a flavoured milk outselling Cocal Cola, the tension and the struggles between the two products were epic.

For the Made To Move Minute, Max Martin … reflects on our fixation with iced coffee. and asks, Is it okay for hard-working people to drink iced coffee but maybe not desk jockies?

In IS IT NEWS, Nigel quizzes us on our knowledge of … milk.

The Adelaide Visa Council features … only one case

And Andy and Marta return with a new album and a new song called, I Sing, in the Musical Pilgrimage. Come along to our final Adelaide Fringe live recording on Tuesday night, March 8, 2016, from 7-9pm at The Arkaba Hotel, for an intimate and fun evening of conversation with Adelaide ‘enemies’, Trevor Pomery and Patrick Baker, who were pitched either side of the South Australian Iced Coffee battles in the 1990s.

Trevor Pomery has been the guiding hand behind the marketing of many household brands we are familiar with. Currently, he is currently the marketing and export manager for South Australian icon, Golden North but tonight we’ll be probing his past in the Iced Coffee game.

Iced Coffee in the South Australian market is something of an international phenomenon on the worldwide marketing stage.

According to sales figures from a 2014 report in The Australian, Iced Coffee sales in Australia were at $200 million compared to cola at $196 million.

Across town, Patrick Baker, who now runs Baker Marketing (where our Steve Davis works) was a sworn enemy of the Farmers Union folk.

As part of the Dairy Vale marketing team, Patrick oversaw countless blind taste tests among blue collar, Farmers Union die hards, and saw for himself how the Dairy Vale blend would win hands down.

However, the battle of the minds was a hard one and he has some ripping yarns to tell about how iced coffee drinkers reacted when faced with the conflict between their hearts and their tastebuds.

Patrick has also worked for a number of household brand names and between him and Trevor, there’ll be plenty of stories and bravado to make the Gruen Transfer seem ho hum 🙂

When you click through to buy tickets from the Adelaide Fringe website, make sure you choose Tuesday, March 8. There are only 25 in total.