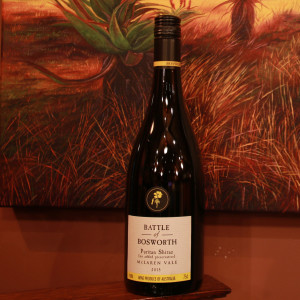 These 2015 Battle Of Bosworth Puritan Shiraz tasting notes came from episode 133 of The Adelaide Show, recorded live at the Arkaba Hotel during the Adelaide Fringe.

Our panel, and our live audience, agreed this wine is a delicious drop.

Steve began proceedings by noting the fruit was there but was not tearing along his palate with its lights on high beam, instead the fruit was jaunting along comfortably like a nice sedan weaving its way through the roads that make up the tapestry of the McLaren Vale wine region.

Patrick picked up on the sedan reference and said, yes, he agreed with the comfort aspect. He could very comfortably drink a lot more of it. Trevor concurred.

Nigel noted the tannins and how they seemed nicely balanced, with Steve adding the slight chewiness of the tannins would make the Battle Of Bosworth Puritan Shiraz suitable for pre or post dinner drinking, let alone with a meal too.

Louise from Battle Of Bosworth tells us Puritan is from early Latin ‘puritas’ or purity. And yet she still let the likes of us taste it! 🙂

The Puritan is fresh, unoaked, preservative-free Shiraz, which is made without the use of any oak barrels.

The team at Battle Of Bosworth simply pick the wine, ferment it and the bottle it.

All of their Battle of Bosworth and Spring Seed Wines are organically grown and certified.

A tip from listener, Vin: Drink this wine early. He has found it is best consumed in the first year or two after bottling. But who needs excuses?

You can hear our live tasting about six minutes in: