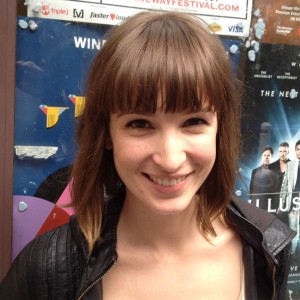 We also get social this week, with Steve Davis attending the Social Media Adelaide (SocADL) group’s Xmas break-up to record some voices, including that of former Adelaide Fringe digital marketer, Peta Spurling-Brown (pictured) who has some inside comparisons between our Fringe and the one in Edinburgh.

We also create a spontaneous love letter to the NBN’s newest board member, Simon Hackett. Will it get us what we want and need? Only he can tell us.

We then uncover words and phrases of yesteryear, from drongo to pashing and all stops in between. Kiss-chasey anybody? Oh, and we’re asking you to share more South Australian slang on Twitter or our Facebook Page. Just share your saying and include #SlangAdelaide at the end of your message.

Shout outs: Steve sent a cheerio to #SocADL and Simon Hackett. Brett sent one to Catherine Lambert. Colin sent one to Mr @Vintuitive.

South Australian Drink Of The Week: d’Arenberg Wines provided a d’Arry’s Original 2010 Shiraz Grenache (or Shirache as Steve referred to it) from McLaren Vale, of course. It arrived courtesy of a prize at the Social Adelaide Xmas event and was used to toast our late patron, Queen Adelaide. Tasting notes and picture of Steve being Zen with d’Arry.

Stories From The Street: Former Adelaide Fringe digital marketer, Peta Spurling-Brown talks about differences between audiences in Adelaide and the Edinburgh Fringes, and spruiks her new website service for Fringe acts.

Adelaide’s Yesterdays with Colin: Colin and Brett takes us back through old words and phrases that have faded or are fading away, such as drongo, sissy bar, donkey, pashing and hooley-dooley.

Brett’s Musical Pilgrimage: The Beards with If Your Dad Doesn’t Have A Beard, You’ve Got Two Mums