In episode 032, the boys finally settled on the items most appropriate and suitable for a South Australian Care Package.

The journey began in epsisode 029, when Nigel IV aka Charlie-Helen Robinson was part of our team determining what uniquely South Australian items would be valued by South Aussies living interstate or overseas.

We whittled down our first list and then asked YOU to vote on what we suggested and ADD your suggestions. See the graph of your voting below.

Here are our suggested items that scored the most points and earned inclusion:

And here are the items you suggested that we voted into the package:

We are yet to hear whether Ms Wills will agree to this.

Provisionally included is a stick of Wintulich’s Metwurst. It can travel if stored below 20 degrees Celsius, so could only be posted in Winter to southern states.

Remember, only items that can be posted safely (and with no age restriction) were allowed, meaning we had to leave out:

And there were a few close to our hearts that missed out, namely:

We are toying with the idea of bundling these care packs for sale in winter and letting people order them from our site in a special SA care effort. Let us know if you’d be interested in sending one of these packs to friends far afield.

How South Australia voted on our SA Care Package suggestions

These are the official results. 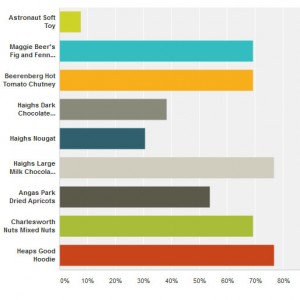