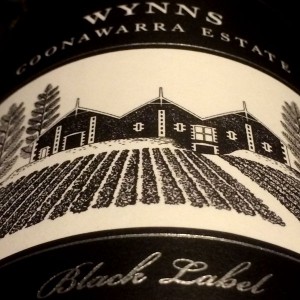 We returned home to the heartland of Cabernet Sauvignon in episode 66, tasting the Wynns Coonawarra Estate 2012 Black Label.

We knew we were heading into Cab Sauv territory a little early after John from Melbourne Street Cellars had taught us that Cabs need at least a 4 year head start, but we went anyway.

And we’re glad we did.

Steve and Colin were both struck by the colour; deep, dark crimson.

Then Steve and Susan waxed lyrical about the smoothness.

There were none of the overpowering tannins one would expect from such a young, pedigree Cab, instead there were strands of fruit (Steve noted the blackberry) and pleasant finish.

While drinkable now, we’d still recommend opening in about 2016 for a sublime experience.

Hear our tasting of the Wynns Black Label 2012 Cabernet Sauvignon.