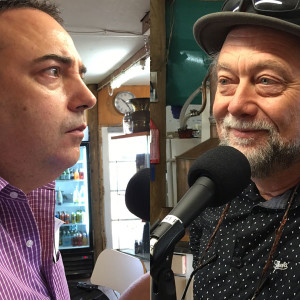 Given we always toast and ‘aged and past queen of Adelaide’, Jon Lark from Kangaroo Island Spirits suggested we select kis The Cat’s Whiskers Gin as the South Australian Drink Of The Week on episode 122.

The Cat’s Whiskers is a very special, rare, aged gin that has been aged in a whiskey barrel.

Jon says aged gins are making a come back and the Australian whiskey barrels lend a creamy nature to this gin.

He says aged gins are smoother than conventional gins and really should be considered as sipping gins.

This was Steve’s first ‘kis’ and as you can see in the image, above, he was concentrating intently on what the master ‘kis-ser’ was doing and saying.

Steve described the experience of this gin thus:

there’s been a long, hot, parching summer and then the first raindrops fall and they dance across the roads and footpaths, sizzling and flashing into steam. This is what was happening on my tongue as the floral notes swirled and the spirit awakened my palate.

Steve noted that our current queen, Queen Elizabeth II, signs off on Glenfiddich whiskey as an official drink made by appointment to the royal family and suggested that our podcast’s late patron, Queen Adelaide, might be coaxed to sign off on this gin.

To which Jon replied, I’m sure there are plenty of other queens around Adelaide who’d be happy to oblige.

Hear our tasting below and you will find The Cat’s Whiskers available from mid-January 2016 for a very short time as we’d expect supplies to evapourate like those first drops of gin dazzled Steve’s tongue.