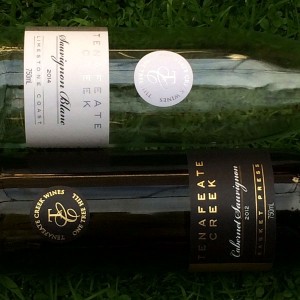 That is the motto around our podcasting studio at the moment.

After dazzling our palates in episode 47, Michael from Tenafeate Creek Wines continued the largesse in episode 48, sharing with us his 2014 Sauvignon Blanc and his 2012 Basket Press Cabernet Sauvignon.

And we couldn’t be happier because both specimens play a game of oneupmanship successfully against their more favoured, regional overlords.

We started with the white, that’s the side of the wine tracks we rarely go as we are primarily red boys, and were pleasantly surprised.

A little grassiness gave way to round, soft, gently sweet fruitiness on the palate, like an adult’s tropical fruit salad.

Brett commented that he had always had a soft spot for Sauvignon Blancs from Marlborough in New Zealand (considered as THE benchmark region for this variety by many) but that this gem, made from grapes sourced in South Australia’s Limestone Coast region, trumps its cousins from across the ditch.

Another white with the power to please red drinkers.

Then we changed gears dramatically as Colin opened the 2012 Basket Press Cabernet Sauvignon.

Steve, our cab sauv champion, was fooled, instantly declaring it a Coonawarra Cab (considered as THE benchmark region of this variety by many) with all the hallmark elegance, power and robust tannic structure. But he was wrong.

This mouth-filling cabernet is made from grapes hand-picked from two vineyards at One Tree Hill in the Adelaide Hills.

Brett opened with discovery of raspberry and a little cough medicine, then Steve followed up with his array of black fruits, a tinge of eucalyptus and his doffing of his hat for the majestic tannins – not medium, not overbearing but just right.

In short, everything you could ever want in a Cabernet Sauvignon!

Oh, and you can jump straight to the part where we taste the wine here: Tenafeate Creek Wines wine tasting .