It is very rare to have such a mix of wine but this was due to us raiding Caitlin and Chloe’s cellars. 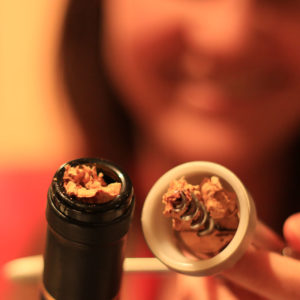 This little number from Banrock Station was the first of the evening.

It gave Caitlin grief as she laboured over the cork.

For Caitlin and Chloe, this wine evoked thoughts of summer days and vineyards.

While Nigel said it struck him more like a Cabernet Sauvignon, perhaps due to its savoury notes.

While finding a 2006 will be difficult, this surprising number from Banrock Station is worth playing with if you find one.

The Adelaide Show podcast has a history with Howard Vineyard.

In November, 2013, we featured Tom the winemaker and his Howard Vineyard 2010 Amos Cabernet Franc, which went on to be named the 2013 SA Drink Of The Year.

This time round, Caitlin pulled the 2014 Howard Vineyard Shiraz from her cellar midway through the show – about 61 minutes in.

As you would expect from this solid winery, the Shiraz delivered as a perfect example of Adelaide Hills Shiraz, with the refinement and balance you’d expect from the cooler climate around Nairne.

Finally, our night was well and truly nightcapped by an unwanted engagement gift that Chloe brought.

The Kellermeister Sable (Tawny Port) was revealed as we were about to enjoy the song of the week and it certainly had us humming.

The Sable starts with a gawdy label and then delivers distilled Christmas pudding straight to the palate.

Listen in to our numerous live tastings in this week’s show.