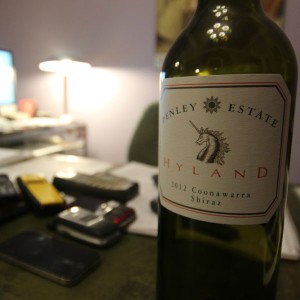 We had two SA Drinks Of The Week in episode 114, the first being the Penley Estate 2012 Hyland Shiraz.

Neil Ward, our guest for the episode, provided this wine because the label has origins in his wife’s side of the family, Angela Tolley.

As Neil explains, there was a coming together of the Tolley family and the Penfolds family in this wine venture, giving rise to the name, Penley Estate.

In this particular wine, we discovered an elegant wine.

Nigel noticed spice with a hint of licorice, while Neil enjoyed its dryness.

Steve was struck by its neat structure with nothing over bearing, in fact, he described it as a polite wine that walks gently down your tongue and doffs its hat as it ambles past.

The second wine of the night was a DiGiorgio 2012 Lucindale Cabernet Sauvignon.

Neil chose this wine because he has a holiday home in Robe and has a great affinity for the south east of South Australia.

Again, we had a wine with nice balance with Neil noting some grassy tones which he couldn’t explain.

Steve described the ‘green notes’ as more like hints of eucalyptus.

It was enjoyed by all.

You can hear our wine tasting from about the 7 minute mark, with the DiGiorgio about 1 hour and 55 in, below.