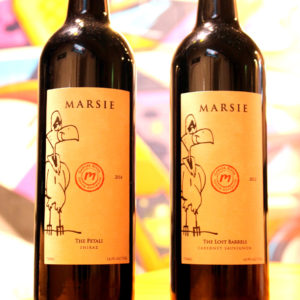 These Marsie Wines 2014 Shiraz tasting notes for this smooth drop from Gawler River, were created in episode 140.

Gawler River is part of the Adelaide Plains wine region, north of Adelaide.

The vingnerons, Peter and Alisson Marsland were two of our guests that night and they were able to take us through the back story of the Marsie Wines label.

It turns out their late son, Richard Marsland, drew the iconic picture of the buzzard on the label when he was a very young lad, as part of a City Of Playford competition.

In the years after Richard’s death in 2008, the Marslands decided they wanted to keep some of the wine grapes they’d been producing for other wineries and have some made and bottled into single vineyard wine for themselves.

One of the first things that will strike you with the Shiraz is its very appealing bouquet.

It draws you in with a mix of red and black fruits, which also greet your palate upon your first sip.

In fact, the first thing Steve mentioned was how the wine seemed to instantly stretch itself right out across the tongue to the sides of the mouth in one enveloping movement of smoothness.

However, listening to the tasting would do it the most justice, so you can understand the shock when the team discovered it is only $12 a bottle, available directly from the Marslands.

The tasting is at the start of the show.

PS At the end of the program, the team tasted the Lost Barrels 2012 Cabernet Sauvignon – yes the wine got ‘lost’ at the winemaker’s cellar and was discovered and bottled this year.