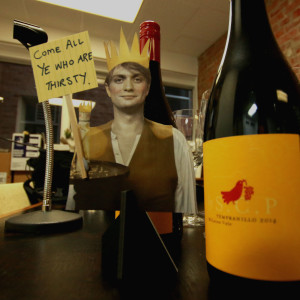 These by S.C.P. 2014 Tempranillo tasting notes were created during the recording of episode 136 of The Adelaide Show podcast.

It was our special episode, holding a postmortem for the 2016 Adelaide Fringe and we were hosted at Slingsby Theatre HQ.

As it happens, S C Pannell Wines is a sponsor of Slingsby and Andy Packer was keen for us to try the Tempranillo.

One curious quirk of this episode was the string of mispronunciations and corrections throughout the show.

It all began with Steve emphaising the double-L in Tempranillo and Andy correcting him to the Spanish, silent-L pronunciation.

Is this the way to Tempranillo? Well, that banter got us into high spirits and I think we enjoyed the wine all the more due to the extra effort in communication!

The first thing that struck us was the smooth, wide, mouth-filling nature of the Tempranillo.

Steve said it covered his tongue as comprehensively as the special paint protection he just had done to his new car. Must be joy to Stephen Pannell’s ears to hear such an association!

The group then all nodded and sloshed in agreement that this was a delicious wine that just hit the right spots, with Andy and Nigel particularly referencing dark cherry.

Steve agreed and said it wasn’t sweet dark cherry it was more like he was nestled in the bush, in an attempt to convey how close his tongue was to the cherry while at the same time noting the earthy notes.

Then came the tannin talk. Steve noted they were as short, clipped and well-manicured as a professionally installed artificial lawn and the panel agreed. Again, not the traditional reference in a set of wine tasting notes – we hope we don’t cost Slingsby its wine sponsor!!

You can hear the whole tasting below, from about the nine minute mark.

PS Sadly, this vintage is now sold out but hopefully it will encourage you to explore the by S.C.P. range.