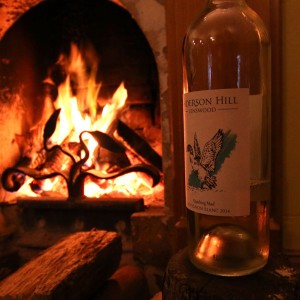 It was a chilly evening but inside the softly lit Scenic Hotel at Norton Summit, two podcasters and three romance authors huddled intimately, engrossed in earnest conversation, while cradling glasses of Anderson Hill wine around a mesmerising wood fire.

Anderson Hill is a winery based at Lenswood in the Adelaide Hills and is a favourite at The Scenic Hotel.

The first wine tasted by the party in episode 111 was the 2014 Quacking Mad Sauvignon Blanc.

As a man who primarily drinks red wine, Steve’s first comment was, ‘it’s almost like there is no flavour’. To which Nigel replied, ‘that’s called subtlety, Steve.’

And indeed, as his palate warmed, he did catch waves of zest, refreshment and even a slight note of passionfruit.

Nigel dived in and simply enjoyed it.

This vintage is called Quacking Mad and author Trish Morey reviewed the back label story and heartily approved.

It involved love for ducks and pining to be one. 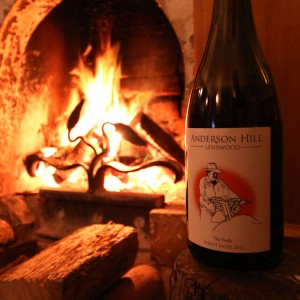 The second wine tasted was the 2013 The Truth Pinot Noir.

Jack from the hotel was the man who made these selections and Steve heartily endorsed this one.

Again, light in style, this Pinot lingers on the palate.

This time Steve got some of the berry backdrop he was expecting but swears there was a little chocolate there too.

The back label copy was critiqued by author Bronwyn Stuart who said it would be perfect for her father-in-law.

The label talks about how The Truth is made for long stories of suspicious origin and that’s exactly what her father-in-law is known for, apparently.

We highly recommend these South Australian Drinks Of The Week and you can hear our actual tasting about nine minutes into the show.