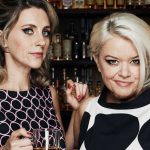 Two women walked into a bar …

Unsung is a celebrate born of ignorance and prejudice, in which Amelia Ryan and Libby O’Donovan sing and tell the story of Australia’s overlooked and underappreciated female singers of the 1960s.

The starting point for this show is a salute to Merle Thornton, one of two women who chained themselves to the bar at Brisbane’s Regatta Hotel in 1965 to protest laws that forbade women from drinking in a public bar. Amelia tells us that women either had to congregate in the Lounge Bar or wait in the car while their “man” fetched them a shandy.

Needless to say, Merle and co won, rules changed, and change within other layers of Australian society began to pick up speed, albeit a few steps behind progressive movements in the USA and the UK.

For Australian women in the 1960s, their role was to support their husbands and families, tending to the house, and being their for everybody else.

This impacted the career prospects of female singers who, while gradually being accepted due to leading lights in the UK like Cilla Black and Dusty Springfield, would often be in a secondary place on the bill behind little known stars who just happened to be male.

Amelia and Libby guide us through this story with interesting factoids and stories in between polished and powerful renditions of songs and medleys, starting with a poignant version of World Of Our Own, working through the pop and bop cuteness of He’s My Blonde-Headed Stompie-Wompie Real Gone Surfer Boy, and then continuing on through the increasing soulfulness, depth, and power of Heart, Girls In Our Town, Superman, and I Am Woman.

The most rewarding and sobering discovery of this show is that we had a treasure chest of talent in the Australian coffers but our conservatism robbed us of its full value.

Just like the story of Australia’s female singers getting their due, Unsung reveals itself in layers. Firstly, we are lifted beyond the simple, tentative, quaint hits like Noeleen Batley’s Barefoot Boy, when we are introduced to Lynne Randell’s Heart. The performance of this song wrests the audiences from its comfort zone and presses us back against our chairs as Amelia, Libby, and band turn up the power. Then, about two-thirds of the way through this show, we have one more major step up when the opening bars of Renee Geyer’s It’s A Man’s World fill the venue with pure, dangerous emotion and propels us way beyond the safety of our seats, our town, our lives, launching us up into a rarefied space of sublime communion with a chorus of powerful, charismatic, Australian female performers.

This is the Australian cultural experience we could have had more of, if only we’d had ears to hear and minds not blinkered by discrimination.

Unsung is a celebration of all that was, all that could have been more, and all that will be in the future and I can guarantee not a single heart that experiences this show will remain unmoved nor leave unsmiling.