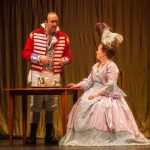 At the end of a gruelling year for all of us, The Rep has show astounding grit to produce the 1775 classic comedy, The Rivals.

Originally scheduled to be an online, filmed production during Covid, it was re-imagined as a live performance when restrictions eased, only to lose a crucial week of the short rehearsal period due to the state’s hard lockdown.

One can only imagine how flatulating that must have been for the cast.

The result: The Rivals is a gem of a production without rival among amateur theatre in Adelaide; it truly is the silver lining of 2020’s dark cloud!

The Rivals concerns the romantic trials and tribulations of Miss Lydia Languish (Allison Scharber), who is determined to marry for love and into poverty. Realising this, the aristocratic Captain Jack Absolute (Patrick Clements) woos her while claiming to be Ensign Beverley. But her aunt, Mrs. Malaprop (Kate Anolak), will not permit her to wed a mere ensign, and Lydia will lose half her fortune if she marries without her aunt’s permission. Among the play’s many plot complications is the appearance of Jack’s father, Sir Anthony (Lindsay Dunn).

This play is not only superbly written with sharp, witty dialogue, it is also famous for the introduction of Richard Brinsley Sheridan’s iconic character, Mrs. Malaprop, who consistently makes verbal blunders, using words that sound like the word she’s trying to say but have a different meaning altogether.

Thinking of the geography of contiguous countries, she speaks of the “geometry” of “contagious countries,” and she also regrets that her “affluence” over her niece is very small.

With such a strong comedic foundation to build upon, director, Matthew Chapman, has nurtured his cast to draw out some ridiculously eccentric performances that enriched the play and have etched it, favourably, into our memories.

A particularly memorable moment that drew hearty guffaws from the Covid-restricted house, was Sir Anthony Absolute’s enraged argument with his son, Captain Jack Absolute, in which he exclaims with exasperated passion, “why can’t you be cool like me?”

This was one of many, many moments in which the players distilled the essence of the play and delivered their lines with deft gusto and considered temperament. In fact, the performance clipped along at quite a pace, sometimes too quickly, costing us some of the joy and rich bewilderment in the scenes featuring Miss Julie Melville (Emily Currie) and Faulkland (Don O’Donnell); their toying with each other was intriguing and one imagines that will settle over the remaining performances.

There are also sumptuous moments throughout the play with one of the richest being the pivotal scene in which Captain Absolute comes to “officially” meet Miss Lydia Languish in the presence of Mrs Malaprop. There is great chemistry between the players, heightened by the joy of multiple identities and cross conversations.

Another triumphant moment in which the on stage chemistry almost eclipses the script is one of the scenes in which Lucy (Rebecca Kemp) plots and connives with Sir Lucius O’Trigger (Matt Houston). Both actors have can’t-look-away on stage presence, further heightened in this production by Kemp’s upstaging bosoms and Houston’s outlandishly preposterous waistcoat.

Depsite (or because of) having a budget of zero dollars, the team has dug deep and worked miracles to design a production that carries the play. A few simple props of chairs, tables, and some accoutrements, has done its job well, putting the play and the players firmly into the spotlight. That said, the costumes belie the austerity. From the colourful, billowing dresses of the central “ladies” to the emblematic features of the the gentlemen’s outfits, they are are a credit to Beck Jarrett. Likewise, Annie Smith has produced wonderful hair creations; from Miss Julie Melville’s severe and stately style, to the well met challenge of taming Bob Acres’ (Guy Henderson) ample, luscious locks!

For attentive audience members who keep pace with the dashing delivery of the script, The Rivals will richly reward you with with waves of deep laughter.