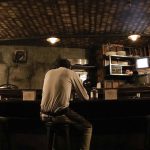 The Dark Master is a strange and enchanting piece of theatre, as mystical and sensual as some of the most colourful, detailed, and obscure dishes served in gourmet Japanese restaurants.

The set is a timeworn restaurant in Osaka and travellers next to me in the audience bore witness to its authenticity.

In fact, writer/director Kuro Tanino has fully embraced realism on the set, balancing the surrealism of the story.

In short, the story is a simple one. A young backpacker stumbles into the restaurant where the Dark Master (Susumu Ogata) decides to hand over the reins to the young man (Koichiro F O Pereira), equipping him with a very small (invisible) earpiece through which cooking instructions will be transmitted from the master’s loft upstairs.

This scenario takes the young man by surprise and he ends the first act having successfully cooked a small piece of steak, guided by his master from upstairs.

We are served some comedy in the second act as the young man scrambles his way through his first day. Having had some self-conscious acting in the first act (along with a limping Dark Master who was able to run up his stairs without impediment – was this deliberate?) we are now served an early dessert in the form of some sweet slapstick-esque comedy involving pots, pans, and ingredients. Indeed, we get our first rounds of laughs at this point.

We also have an idea planted into our heads by a diner who is an actor hoping to become a character that a director will imagine and seek. It is a tempting thought as we wonder whether the Dark Master is “imagining” a character by re-forming the young chef into a “man”.

Then, one night, a Chinese diner comes late, demands a signature dish and over pays for it, many times over. This is when the story turns sinister. From the joy of watching the immaculate culinary stagecraft that produces real dishes during the action, we hear from the Dark Master that wealthy Chinese people are muscling into the neighbourhood and buying out everything they can.

We never recover our innocence after that. Our young man has become trapped by the threatening Chinese thug and what began as a wonderful opportunity to grow as a person and find meaning has become a dreadful labyrinth of despair.

This is delicate theatre. Yes, there are working switches that turn lights on and off, and working taps that pour water for washing, and a working stove where cooking takes place (oh, the garlic, the garlic), but swirling about the objects is an ethereal expression of presence and life. The satiation takes you by surprise, much like the satiation of a meal comes a little after the frenzy of eating.

And the interaction of the earpiece enabling us to hear the Dark Master while still needing to read his captions, was an acquired taste; it added the layer of distance but it would be interesting to see what affect it would have if the transmitted instructions were in English.

The Dark Master is the dark horse of OzAsia; a succulent serving of storytelling.