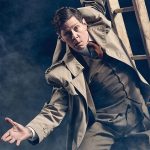 Alfred Hitchcock was the master of suspense and the suspense in this production of The 39 Steps comes from wondering when the action will return to the storyline, especially in the second act which spirals into a frenzy of farce.

To be clear, this production is a masterful retelling of Hitchcock’s classic film, hailed as one of the best British films of the 20th Century.

The original movie was known for being lightning paced in its day and this production maintains that tempo while also weaving in extra helpings of nonsense and banter to engage the audience and get the character count up.

The fourth wall appears and disappears on a whim, as do props, and we are signalled this style in the opening minutes as our hero, Richard Hannay (Nathan Page), having just been pushed into centre stage in an armchair, notices the spotlight is a little higher than it should be, which he remedies by overtly pushing his chair back so he is fully lit and ready to begin.

Interestingly, the concentrated feast of fun coupled with fast-paced and highly-precise physical theatre, meant The 39 Steps often felt like a high calibre show from the recent Dream Big children’s theatre festival, such is the high level of performance they all achieve.

There are some eccentric characters such as the Scottish inn keeper and his wife (that beard!) and some high octane costume changes and slapstick such as the police officer and train inspector arriving to inspect the train carriage where Hannay is cloistered with two undergarment sales people. How can three actors play five characters in a round robin of conversation and action? There are hats behind backs and the choreographed helping of hands to lubricate the fast-paced scene with precision.

There are no life lessons in The 39 Steps other than a reminder that it is okay to go to the theatre for simple fun, some times. And embracing that sentiment, last night’s audience cheered heartily.

Alfred Hitchcock will be smiling in his grave.