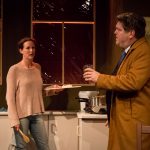 For everything you repress, there is a price to be paid. This is the theme of Skylight, written by David Hare, which opened this week at Holden Street Theatres.

Skylight primarily centres upon the relationship of Tom (Brant Eustice) and Kyra (Alicia Zorkovic). Tom is an entrepreneur and restaurateur who has had an affair with Kyra, a young waitress who was taken under the wing by Tom’s wife until the day the wife discovered the affair. At that point, Kyra left instantly, and Skylight is the “reunion” of the two lovers in the wake of Tom’s wife’s death.

Director, Tim Williams, says the challenge was to present these two flawed characters fairly and without prejudice. I believe that challenge has been handsomely met because I found myself switching emotional allegiances back and forth throughout their long, deftly-crafted conversations and arguments. I cannot remember the last time my attachment to characters in a play changed sides as many times and in such quick succession as happened with these two in Skylight. It was like my affection was being returned back and forth, like a tennis ball in rally after rally between two champions.

There are many beautiful lines in this play, as the characters “return serve” in a blend of arguments, sometimes heated and often forlornly poignant and reflective. Kyra holds her cards close and her character is more like an obstinate and tentative flower, holding herself closed until there is enough warmth for her to entrust her petals to the world. Meanwhile, Tom is a mixed deck of cards ranging from bluster to lamentation, sometimes suiting up in brazen bravado while also daring to strip right down to exposed vulnerability.

At its heart, this play is a study in two characters reflecting on how the power of infatuation blinded them to the boundaries of an existing relationship that one of them was in. They both reacted differently and both have remained haunted by their actions. For Kyra, she has embarked upon a life driven by repentance. For Tom, has endured a quest to assuage his guilt while remaining under the unforgiving glare of his late wife.

This play is a masterclass in modulation, particularly Tom’s character. In the hands of lesser experienced players, we might have left the theatre deafened by full throttle roaring and blaring but not so with the ever-adept Brant Eustice. He has treated us, again, to a well-studied character, with each outburst as justified and as natural as the rolling in of various waves on an interesting beach.

And Alicia Zorkovic was equally transfixing on the stage. Our attention was often drawn to her, not only while speaking but often (very much so) while she was absorbing, observing, and analysing Tom’s foray into emotional truth telling and revelation.

The business on stage was sublime. From Tom’s habitual drop of water into each glass of whisky, to the emergence of new thoughts interrupting the routine of simple actions like raising a glass to the lips. This was uber naturalistic and gave our suspension of disbelief a firm foundation upon which to base itself. Running water and the smell of cooking on stage, added extra layers to the experience, as we huddled in a bleak flat in the “wastelands”.

Tom’s son, Edward (Jackson Barnard), was lightly drawn by Hare, enabling some exposition before the main fare commences; the dual between the lovers. Barnard brought a sparkle of youthful zest, soon lost in the murky fog of adult hearts navigating towards and about each other in darkness of estrangement.

Skylight is a chance to peer in from above upon two souls who searching for any signs of connection between each other and relief from the regrets of their past actions and inactions.