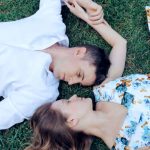 That question has been answered by Essential Theatre.

Shakespeare is alive and well among the vines at Deviation Road winery in the Adelaide Hills.

With the 19th season of Shakespeare In The Vines underway this weekend, the Essential Theatre troupe has indeed breathed new life into the story of Romeo + Juliet through their “two hours’ traffic” of their vineyard ensconced stage.

In this production, we have modern touches with mobile phones as props while all the time remaining true to the declamatory nature of the Bard’s original actors who relied not upon the the artifice of the fourth wall but who embraced the fact they were actors playing parts on stage.

This talented cast held court with fine, unwavering projection, strong physical renderings of their scenes, and masterful delivery of lines with pauses and emphasis to clearly convey the meanings and double meanings of the text.

Juliet (Mia Landgren) appeared initially in her school uniform, reminding us of just how young these star-cross’d lovers were, while heaping pathos upon the story of her tragic ending next to her Romeo (Eddie Orton). Orton brought a stiff, youthfulness to the role, at once both melted by love and obstinate in pride, while Landgren won our hearts with her spunk and energy, which swayed wildly in the frenzied crosswinds of her emotional journey.

While Juliet’s school skirt was an emblem of youth (and all that stands for), it was intriguing to see Congolese-born actor, Rashidi Edward, play both the Tybalt and the Apothecary. There were some momentarily-raised eyebrows in response to this actor playing two roles in which activities most closely associated with stereotypes of “black men” peddled in mainstream media were performed; knife-wielding by Tybalt and street-dealer-styled drug-dealing by the Apothecary. But such eyebrows quickly relaxed as patrons realised how earnestly civil thoughts might make earnestly civil minds unclean. Edward commanded great stage presence, from biting thumbs to landing blows.

On the subject of physicality, Myles Tankle’s work as fight coordinator was worth the extra effort because such scenes where fisticuffs took place were performed flawlessly, surprising the audience often with the sounds and movements of swift, crisp slaps, and deft thuds of fist-delivered blows.

And finally, another highlight of this production was the performance of Madelaine Nunn as Mercutio and Friar Joan. In particular, Nunn’s bold, outlandish portrayal of Mercutio contrasted greatly against her diminutive size and hearty appreciation and much guffawing from the audience. The Bard would have praised her for playing to the pit with aplomb!

There is little surprise that many in attendance are regular attendees of Shakespeare In The Vines, and our hats we doff to Essential Theatre’s players because their toil did indeed mend against the chill of an evening in the Adelaide Hills.