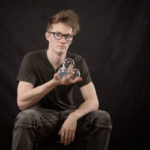 This is Razi’s third time at the Fringe and he rapidly opened with some card work and some sleight of hand.

This was followed up by a cleanly performed 3 Rope Mystery trick.

Razi then moved on to a series of tricks with a Rubik’s cube where he could really show some dexterity and a sign of things to come.

A brief sojourn into some mentalist magic and then onto where he really shone.

Although not technically magic nor illusion contact juggling does indeed give the impression of illusion.

His graceful and flowing work was entrancing to watch as he demonstrated great manipulation of rings and balls, seemingly having them float in space whilst his hands moved around them.

Finishing well with some more sleight of hand, Razi had indeed put on Mesmerising performance.