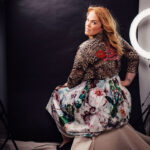 Katie has a warm even, dare I say it, cute stage presence that is imbued with a hint of cheeky naughtiness lurking a few layers down.

On a bare stage adorned with her keyboard and a few mics, she takes centre place and leads into her title song about positivity, with some accompaniment from her husband, Chris.

This is a strong opening in which we have our introduction to Katie’s sumptuous voice. Not only are her lyrics clever and fun, and her musical compositions/arrangements bright and oft times ornate, her voice is delicious. In fact, if her voice were a cheeseboard, it would consist of creamy camembert, sharp cheddar, some tart dried fruits, and some moreish, crunchy, salty nuts; such it the “gourmet” singing range. Particularly noteworthy is the guttural depths of Dear Neighbour, through which we glimpse the calibre of her vocal powerhouse, much like she was glimpsing the surprising attributes of her neighbour!

If I were to return to the food analogy, I’d comment that some songs in her show were deeply nourishing, while a couple were more like snacks or morsels of ideas. There are some light moments of audience interaction that promises a little more fun than is ultimately delivered and perhaps this is because when Katie is at her keyboard in full command delivering a solid song, there is little by way of sideshow that is needed.

If you’re in a gay mood and looking for some down time and some chuckles, Positive might just be the tonic.