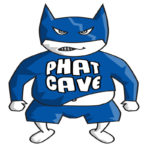 They say “What happens in the Cave…stays in the cave” and Mick the MC is probably so grateful of that.

The show started late, which wasn’t an issue, there’s a nearby bar however that sign, a sign I’m not sure Mick saw coming, was for a long and I imagine difficult night.

The sign of a good MC is how well they can handle the unexpected and Mick was soon to be tested.

It all started well with Evan from Canada

During this time, we’ll call her Patricia and her friend, sauntered in, bottle of white in hand. Evan continued on noting the interruption.

Maybe we can blame Canada for starting this, maybe we can’t but for the next nearly two hours our very unlikely audience member became part of the show.

The pretty full house will support me here, she started it.

Anyhow Evan survived with a great routine, unknowingly lucky to escape before the harpy from hell fully unleashed.

Mick continued between acts, attempting to keep Patricia in her place.

The banter rapidly escalated from slightly funny, through to cringeworthy and then to hysterically funny as Mick went in for the kill.

The acts came and went as the hilarity rose

Matt came and went with a great routine about Adelaide roads and suburbs.

Patricia is from Paradise evidently although by now the audience was thinking she was probably from one of the planes of Hell.

Matt finished with a very visual hilarious routine about US presidents.

Lewis Garnham popped in with stories of Melbourne and dogs.

Mick the MC then had another go at taming Patricia, by now it was getting hilarious and the barbed comments were just sliding off Teflon Pat but the audience was loving it.

Seriously side splitting humour, everyone’s inner schadenfreude was running with the show and the audience was feeling for Mick.

Amos Gill had a go with talk of Spa’s and sex, by now the evening was pretty much no holds barred, nothing was off topic and it was getting funnier by the minute.

Mick was gaining control and the upper hand and we had a surprise visit by the Puppetry of the Penis guys, I think it was a surprise to them too.

Word must have been getting around about Mick’s challenging audience and the tent crowd was growing with other performers coming to see what the fuss was about.

Alas, our Canadian friend had a visit by Karma and joined the show during a meaty tutorial to add to the laughs.

By the time the show ended it was enjoyably way past bedtime, Mick I imagine was off seeking therapy and the audience became aware of their sides hurting.