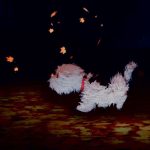 The DreamBIG Children’s Festival made storytelling magic happen through the production of New Owner by Perth puppeteers and performers, Arielle Gray and Tim Watts.

Along the journey we must negotiate feelings of happiness, joy, loss, sadness, fear, being alone, hope, and, ultimately, comfort and nurture.

But as my 10yo co-reviewer commented, we are left with a lingering sense that in life, “sometimes you just have to move on.”

The action transpires on a slightly raised stage viewed through a cut out area in a thoughtfully-segmented curtain in a blacked out theatre. This arrangement allows for the projection of images and video on the curtain to be embellished by live action puppetry and acting. Sometimes the full stage width of curtain is in play with projected narrative, while at other times, parts of the curtain have been lifted while actors and puppets perform in the modest “cutout” area of the screen. And, in a spellbinding way, we are often treated to a hybrid of both, as puppets interact with video.

In fact, the visuals often have a sense of video game architecture, especially when our hero puppy goes missing in the cold, wet, dark city streets, and tumbles into the sewer which becomes an arcade-game environment of descending, geometric pipes and tunnels.

The impressive soundtrack carries us, in the same way our canine is carried along through the water in the sewer tunnels; ever moving forward, sometimes quickly, sometimes slowly.

And here’s the great triumph. In a show pitched at children 9-14, Gray and Watts dared to subject us to long, slowly-paced sections of wonder, discovery, and gradually increasing suspense; and they succeeded. There was no stirring in the house. Engage young audiences in authentic and dramatic stories about the elements of life, and they will be up for it. Bravo!

If this doesn’t help other producers of children’s theatre to “dream big”, I don’t know what will.