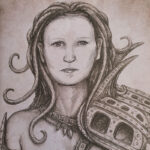 Emma Knights channels all that is puckish and whimsical in this hour of original music exploration and reflection upon Myths, Legends and Fantasy.

Emma appears on the stage as woodland nymph, exuding her naturally endearing presence as she explains the concept of the show.

There is something earnest and polite in dutiful explanations, a sign of the deliberate and precise lyrics and compositions that are to follow.

While Emma as the nymph weaves short stories between songs, sometimes closely related to the ensuing song and sometimes nebulously so (I guess nymphs write their own rules), the music and song demand your full presence to unlock their treasures.

In short, you will learn that the music in this show, by and large, is not simple, sing-along music.

This is music you give your attention to, then you walk beside it, and gradually you’ll find you’re walking in harmony with it, only to look up and discover you’ve been led somewhere beautiful and intimate and quiet.

For someone new to this almost Philip Glass-like genre of music, you’re likely to find it a demanding experience because the song elements of notes and voice are laid out in the service of telling story and rendering emotion; sometimes minimalist, sometimes staccato, sometimes with flourish. There are no cliched treats or treacle-like melodies, at least in the early part of the show. Instead, the songs are free to shift tempo (sometimes mid-phrase), with the focus often shifting to their “sugar-free” poetry, leaving the piano’s frenetic-cum-somnolent playing to provide scaffolding for the aural sculpture.

Just as you sense there is a voice straining to break free, Emma sings one of the most poignant songs ever written, The Absence Of Your Voice.

From this moment on, you’re ready to keep pace with this musical nymph as she ups the female legend quotient and swings from wolves to Pandora, opening up a jar of glorious “miseries”.

There are hints of Nick Cave and Suzanne Vega in the second part of this show, as we are drawn to Knights’ musical round table to be blessed by her song, Equality & Chivalry.

As Tinder gets a reworking with the Greek Gods, there’s a flash of Sondheim in the whirling of ideas and lyrics that dance onto the peaceful, night garden stage.

Myths, Legends and Fantasy, is quite unlike most cabaret. It doesn’t go for the familiar and easy. Instead, like the heroines celebrated in some of the songs, it strives to share a unique voice and to have it heard.

This is a simple production in which the songs cast their spell. And it’s been simply shot by Hartstone-Kitney’s Black Box Live.

Puck had no need to sing the apologetic epilogue but we’re glad it took place. Had it not, that might have offended.

Who would have thought the true spirit of the Adelaide Fringe were to be found in Emma Knights’ nymph? It’s here, and it’s the voice of curiosity, honesty, and mischief. Go on, I dare you!