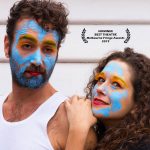 Mullygrubs is a Fringe show that sits somewhere between the unsettling imagery of the puzzling, Adelaide-made, pre-schooler TV show from the 90s, Mulligrubs, and the definition of mulligrub, which means to complain or sulk or feel down.

Performers Harry Thompson and Leah Filley draw their audiences into an intimate conversation between two friends in their 20s/30s reflecting about life, love, disappointment, misogyny, and hypocrisy.

Intriguingly, and perhaps as an homage to the children’s TV show of a similar name, the characters interact as adult juveniles; they adopt a style of teen-babytalk as they pout and over-exaggerate their reactions while bemoaning their gripes with the world and listing things they’re unhappy about or even hate.

At points, the complaints sound like preambles to Get Up! petitions. They are earnest and jingoistic, slogan-like rather than nuanced or layered. Then at other times, their stories and reflections get “real” and personal as our two-dimensional characters become three-dimensional before our eyes.

There is much territory of pain and regret covered in this show, along with graphic recollections of sex, as our pair of protagonists flit back and forth from story to story, like moths trapped in a confined space beneath an ever-present flame before an unexpected twist brings a form of liberation and drab peace.

As Leonard Cohen once sang, every heart to love will come but like a refugee. Thus, these characters stagger towards their fates.

This is theatre that demands attention, an ability to endure discomfort, and a willingness to laugh in the darkness. It mines bleak territory of privilege and hopelessness and is recommended for the emotionally brave, or for the broken who are hoping to see themselves reflected on stage.