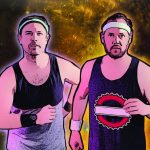 Good theatre has good pacing and that includes this production of Marathon at the Bakehouse Theatre.

Steve (Todd Gray) and Mark (Ross Vosvotekas) are two friends who get together to jog, and for most of this 55-minute show the actors are physically jogging on the spot.

Intriguingly, the foot stomping provides a metronome effect. The steady beat not only keeps the show moving forward with a particular rhythm, it also provides a measure of how time is elapsing during the pauses and silences that punctuate the narrative.

As Steve says, you won’t get anywhere in life if you’re not prepared to suffer, and indeed, the physicality of the jogging deepens the connection between the actors and the audience because we can see there is no room for confection on stage; it’s all in and all on.

The perspiration is real and the subtle shifts in jogging formation create an authentic experience of being immersed in the presence of two joggers.

And yet, unlike visual gags and novelties in a farce, which grow tiresome quickly, the jogging provides a backdrop, a foundation upon which the story is built and although we are aware of its presence it never overshadows the storytelling.

This play was originally written by Edoardo Erba in Italian and the English translation by Colin Teevan has been further modified for the production to include contemporary references to Australia and even Port Adelaide Football Club! Such modifications can sometimes be too heavy handed but in this case they add to the relevance of the story and the Port reference even draws enthusiastic engagement from the audience.

That said, some elements of Edoardo’s script are of their time or “unwoke” as the saying goes, especially some of the references to women in relationships, but equally, the script touches on some profound and chatworthy themes such as jealousy, ego, existence of god, suffering, and the original story of Marathon.

Even though I was not a fan of the way Edoardo brought his script to its conclusion, this production provides so much satisfaction from the first footsteps that my minor disappointment with that plot element was as insignificant to my enjoyment of the show as a slight stitch is to a seasoned runner.

I believe Marathon is a thoughtful and entertaining theatre experience. Just like a jogging session, you will end up feeling much better for having made the effort to get out and support earnest, adept theatre being made here in Adelaide.