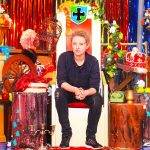 There’s no family business like show business, that seems to be one of the central themes of I, AmDram.

Hannah Maxwell comes from a long line of am-dram devotees, stretching back to great grandparents. With such a heritage of “amateur dramatics” in her bloodline, it is to be expected that her coming-of-age/coming out story of estrangement from and attraction to am-dram would itself be an homage to music hall gaiety and passion.

In an intimate room in the underground tunnels at Treasury 1860, this endearing performer from the UK takes and holds centre stage as she unravels layers of stories about her life where everything revolved around twice yearly amateur productions of classic musicals and not-so-classic musicals.

For example, Maxwell recalls tension at home during the lead up to My Fair Lady which was being co-directed by her mum and grandma. Apparently, they argued fervently over artistic differences in the months leading up to the production. Family dinners were constantly punctuated by snippets of song as a particular turn of phrase triggered “musical” memories among those present.

For those of us whose hearts desired to be more involved in theatre, this family sounds idyllic. But, as Maxwell discovered, this family and small hometown community struggled when their prodigal daughter announced she was gay while also spurning the usual hungry desire for am-dram limelight.

In her show, Maxwell uses simple props and her proximity to the audience to bring us into her world, switching between telling stories and re-enacting them. She flits from keyboard (storyteller and tinkler) to centre stage (using chairs to recreate a makeshift train carriage or breathe life into stories about set changes during amateur productions) to wandering throughout the space (accompanied by a soundtrack) to gently involve her audience in the story.

This is sublime, one-person theatre made all the more enjoyable due to Maxwell’s comic delivery and winks to the audience.

Anybody who’s been in or supported amateur theatre and musicals will find I, AmDram an endearing experience with many laughs prompted by seeing their own reflections in her stories.