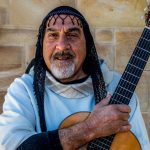 Let’s start by setting expectations. Homer’s Odyssey The Musical is not a musical along the lines of Mamma Mia or Les Misérables. It is, instead, a clever re-telling of The Odyssey, interspersed with some songs.

If you find it difficult to read mythological stories like The Odyssey, Homer’s Odyssey The Musical, is an enjoyable way to get the “non poetic” version of the story.

Loucas Loizou plays Odysseus himself, drawn into the courtyard to tell the story of his epic journey to the crowd that has gathered.

This simple device is a pure delight, if you arrive, hungry to learn about or refresh you understanding of The Odyssey.

The relaxed, earnest way Loucas tells “his side” of the stories involving fighting the Cyclops, tricking The Sirens, and executing The Trojan Horse ploy, highlights exactly where soap opera writers should turn if they want inspiration for epically momentus plot twists and turns.

The songs are introduced within the flow of the storytelling and while they lend good character to the event, their very simple lyrics tend to pause the story, rather than move it along. The most surprising song choices are We Shall Overcome and Kumbaya at the end. Having just endured tales of sailors praying to mythical gods for favourable seas, it was an intriguing choice to insert songs praying to modern day gods. Interestingly, with the audience joining in, there was a mystical feeling deep within the Adina Treasury Tunnels.

Loucas Loizou has a generous, warm nature and seeing any one of his four Fringe shows will give you an experience of something different and unexpected. The activist inside you might want to deliberately buy a ticket to his show, A Greek Cypriot Refugee Remembers And Sings World Songs because ticket sales for this show have plummetted recently, due to the nasty discourse about refugees in the media. Perhaps Scott Morrison might spend some of his Captain Cook reenactment money to soften the blow!