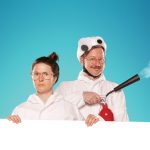 It’s not often that we get documentary theatre on such a high profile stage as the Space Theatre at the Adelaide Festival Centre, but that’s exactly what Windmill Theatre has created as part of the DreamBIG Festival.

The journey began more than five years ago in Renmark with the Riverland Youth Theatre. The team interviewed some locals and started playing with questions about the big mysteries of life.

In essence, this project hinges on having asked 50 people, aged 8 – 102, from Adelaide and surrounds to answer the question: what big mystery would you like an answer to?

The questions that made the cut in Creation Creation are those that lent themselves to be explored visually on stage.

Thus, Creation Creation is an intriguing piece of theatre in which Jonathon Oxlade and Fleur Elise Noble, dressed in neutral whites on a white stage with primarily white props, respond to a soundtrack of questions and explanations/deliberations recorded and edited by Roslyn Oades.

Oxlade and Noble conjure up many memorable vignettes as they play out scenes to illustrate what’s being talked (and signed) about from the soundtrack. In particular, their re-imagining of the Big Bang is very illustrative, and as stars and planets are played with there are cheeky moments as well us those of pure fun.

Perhaps the most striking scene was their creation of a Black Hole. They transform the white stage area into blackness, and then cleverly demonstrate movement of a being and the different rates in which one part of a body might get sucked into a Black Hole, when compared to the rest. Apart from visually capturing a sense of energy, we see legs stretch and dimensions of all things become warped. The huge of the sell out crowd of school students were deeply fascinated by this moment.

The dilemma of broaching subjects like creation is the breaking of the rule to never talk about religion. In 2021, we certainly don’t want demonstrations of creation stories to risk being dubbed as thinly disguised prostlytising. It was with anticipation and curiosity that adults in the audience braced themselves for this part of the show. Christian, Aboriginal, Chinese, Ancient Egyptian, and Indian myths were demonstrated and, cleverly and bravely, the players let the stories speak for themselves. It is a curious thing when someone sees their embedded beliefs re-enacted by others who are doing their best to represent the story. It is at this moment that some of the fanciful and more absurd elements of stories are seen with fresh eyes, unlocking an opportunity for re-assessment.

Creation Creation presents a barrage of ideas and concepts, easily enjoyable at the surface level of physical theatre and documentary storytelling, along with fodder for further discussion and exploration. How enjoyable would be the journey home as children ask more about the scene describing conception and birth.

Advice to teachers and parents: be prepared to journey into significant discussions after this show.

Creation Creation is a dense and complex undertaking by Windmill Theatre Co and it is to be applauded for finding a novel and creative way to potentially engage young audiences in pursuing philosophical discussion and scientific exploration after the curtain falls (or after the plant is watered, I should say).