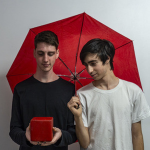 In a fresh and inspiring blend of circus, music, and colour, duo Iri Roche and Joe Cornish present Chroma. The show taps into the fun and wonder of childhood, playing around with ideas and colour, and things that make you happy.

After Iri’s award winning show Flow last year, Chroma is an amazing progression through combining his skills in circus and music, with Joe’s skills in dance, circus, music and visual art to create this unique performance.

The two emerging artists from the Barossa Valley met and started performing together in high school, and their close friendship can be clearly seen on stage. With various feats of juggling, using diabolo’s, juggling balls, and meteor’s, being performed intricately between the two of them.

Their fun dynamic even makes mistakes hard to spot. As they jokingly annoy each other during tricks and making faces at each other and the audience if something goes wrong, its hard to tell when its intentional or accidental. The two are also silent while on stage, almost putting on a mime act as they communicate between themselves and with the audience, which makes these looks even more poignant.

Plus, their use of unusual props in their performance allows for a show a little different from the mainstream. The duo find fun ways to subvert your expectations with each new prop and trick, from passing a diabolo between them on increasingly different objects, to juggling an umbrella, to literally pulling tricks from a hat.

Outside the impressive circus performances, the highlight of the show is the improvisational music they create together. Each new act is accompanied by a new colour and a new sound, which they build up one instrument at a time. Using clapping, percussion instruments, a keyboard, a bass, and more, to make incredible music that will make you want to join them in bopping along.

Chroma is the perfect show for everyone, and not only because it is family friendly. The show has circus, live music, artistic interpretations, comedy, and much, much, more packed into just 50 minutes. So, bring some colour into your life by seeing this incredible performance by two emerging south Australian artists.