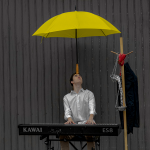 Every introvert can step out into the world and do something. This is Iri Roche’s something.

Flow is Iri’s debut solo show, and it features a mix of original music, circus, and physical theatre. Having over 10 years of performance experience under his belt, and being a graduate of the SA Circus Centre, which he joined at only 3 years old, this young Adelaide based artist will leave you speechless.

Set around the feeling of a warm dry room while its raining outside, Iri explores inner thoughts and emotions though recorded spoken word while he performs. With equally impressive piano and circus skills, Iri follows a vague storyline in a room with a leaky ceiling, drawing the audience into the world of his introverted thoughts.

With immersive visuals and sounds, the performance is uniquely interesting. Using a dark stage and glow in the dark objects to create a weightless underwater scene makes juggling look highly impressive, and the constant rainstorm sounds pull the audience further into the show.

Iri also uses both common household objects, such as a broom, an umbrella, and a jacket, as well as more traditional circus objects, such as juggling balls within the show. These more common objects turned props give the show a feel of simplicity and minimalism, while still showing spectacular skill.

A small mistake here and there didn’t make a difference. Considering I can’t juggle two things let alone five, it’s all incredibly impressive and humbling to an extent.

The only downside to the show is that it flow’s together so well and creates such a quiet atmosphere, that clapping occasionally feels like an interruption to the performance.

Let this show be what it’s intended to be and inspire other introverts to step out into the world as Iri has.