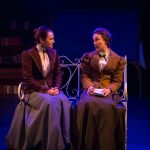 Blue Stockings is one of the saddest and frustrating and angering and entertaining bits of theatre you’ll see.

The play by Jessica Swale is about the early years (in the 1880s) of the struggle by women to have their higher education studies (identical degrees to men) rewarded with certificates instead of being sent home empty-handed.

At that time, educated women were referred to as “bluestockings” because in the 1700s, women’s groups that had formed to invite “men of letters” to discuss profound subjects, were generously indulged by scholar-botanist, Benjamin Stillingfleet, who was known for wearing cheap, blue, worsted stockings; frowned upon by high society. The women gradually came to claim this mantle with pride.

In this production by Red Phoenix Theatre, the story unfolds on the full, black stage area of The Studio, adorned by bookshelves and a blackboard along the back wall, and various timber tables, benches and chairs along the sides. Throughout the play, these are marshalled and manipulated to create railway station platforms, school rooms, student accommodations, park spaces, etc, with aplomb.

One of the first visceral interactions with the set comes from the use of chalk on the blackboard, in which each scene’s title is freshly written and displayed. The swirling font and the arduous rubbing of the chalk with a duster, adds extra texture to the performance.

Thereafter, our suspension of disbelief is sumptuously maintained by the immaculate costumes for all 17 cast members! Sharon Malujlo has adorned the actors with flowing dresses, bows, jackets, etc, ably recreating the heady era of late 1800s England.

The story begins with the historical figure of Elizabeth Welsh (Kate Anolak), mistress of Girton College (the college for ladies, situated two miles from Cambridge) arguing the case for women to have the right to graduate with a certificate. Anolak portrays Mrs Welsh with compelling power and some stiffness, relating the great burden Welsh was constantly aware of in her struggle.

Alongside Welsh, the story also centres on the journey of young, female student, Tess (Kate van der Horst), as she navigates the demands of the curriculum, the politics of being female in the male-entrenched culture of Cambridge, and the disorienting nature of experiencing her first love. Van der Horst’s performance was solid and endearing, eloquently capturing the arc of her character from potential world-changer to lost and smitten wanderer.

There were many solid performances across the large ensemble but particularly noteworthy was Thomas Banks (Bart Csorba). Although he has the unfair advantage of playing one of the hero characters, Csorba’s energy was always evident and his projection of Banks’ drive to further the education of his young, female charges, radiated throughout the theatre.

Carolyn (Rosie Williams) is a well-travelled character, an early Bohemian, and is endowed with some particularly profound lines throughout the play. One such example was her contrast between no women being allowed to vote on whether or not women should be entitled to graduate with a degree, and the inclusiveness of a tribe in Burundi. That tribe was selecting a new chief and everybody got to vote by putting a rock into a basket, even Carolyn’s family because they’d been living with the tribe and were naturally given a chance to have their vote counted. Williams plays this role with aplomb, sometimes capturing the profound moment, while at other times, milking the comedic elements as her fellow students roll their eyes as she tells yet-another-story-based-on-a-far-flung-place.

Libby Drake has managed to direct this large cast with great balance, ensuring there is clear demarcation of status, great economy of movement, and judicious use of props.

While Dr Maudley’s (Brant Eustice) vicious and patronising put down of female students was a sheer, naked, and brutal display of mysogyny and fervent allusion to the grandness of Cambridge, through Swale’s script we see glimpses of similar, idealistic fervour in the woman as they frame their struggle in terms of a revolution. One example is student, Celia (Laura Antoniazzi), exclaiming, “people like us don’t get buffeted by the wind. We change its course.” And thus, we have the meeting of wills. One side with 800 years of tradition and self-assurance, the other with a righteous drive to be proven as equals.

Blue Stockings is a reminder that humans get locked into rigid positions all types of matters and distinctions and while some are annoying quirks like petty superstitions and myths, others become entrenched as everlasting prejudice and oppression, which ultimately robs our world of much potential. This play reminds those of us who have started coasting on some of these systemic struggles, especially in relation to male privilege, to start pedalling again and to keep pedalling until everybody has a fair opportunity of running their race without headwinds imposed by ignorance, selfishness, and fear.