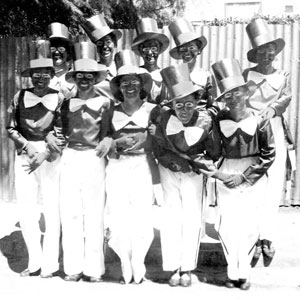 This week, Colin dredges up some interesting history surrounding Adelaide’s annual Xmas pageant. From having the former owner of John Martins hiring a light plane to dive bomb the suburbs with a loud hailer on the morning of the first event to ensure a good turnout, to revealing the missing character from event number one. Steve also reminisces that his maternal grandma, Lillian Field, was in the pageant in 1935 as one of the ‘ten little nigger boys’, pictured here (thanks to Steve’s parents for fishing it out and scanning it). Quite shocking to see how far we have progressed with society mores and cultural breadth.

There’s also some revenue raising ideas for the State Government, along with praise for new roadworks.

This week’s wine will shake you out of your Shiraz habit, while Sun Theory takes us out with music about getting you out of bad habits of thought.

Stories without notice: Steve suggests the South Australian Government makes money from its EzyReg app, allowing us to capture a commission if we discover other motorists with expired registrations. Brett explains the Cheese Train from CheeseFest. Colin continues his pursuit of insight into Adelaide’s Bucket Tree.

Adelaide’s Yesterdays with Colin: Looking into the history of the Credit Union Christmas Pageant.