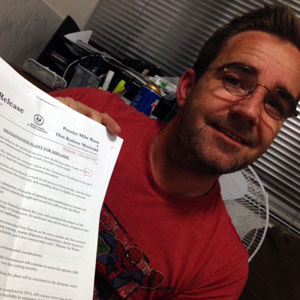 NOTE: Discussion about SA Water price increases in this episode have been challenged by SA Water and a conversation is underway. We will have an update in Episode 006 and hope to have a definitive outcome by Episode 007.

This week, Colin is on the sick list and in his place we have Nigel Dobson-Keefe (pictured in the studio). Nigel is an Adelaide-based professional scientist and brings some of his critical thinking skills to bear on our discussions, especially Brett’s proposal to flood our plains with salt water.

Apart from Nigel’s nasty water surprise for all of us, we explore the suburbs of Adelaide looking for a house, have a rather old sparkling shiraz from the southeast, and get the Adelaide Visa Council stamp working overtime.

We also ask you: What should we rename the Britannia Roundabout when it is reopened with two roundabouts in place of one.

Shout outs: Steve had two shout outs this week. One for his Year 12 drama teacher, Gaenor Roeger with whom he reconnected midweek via the Woodville High School Facebook Page. His other shout out was for his long lost mate, Sean Perry, the former Radio FIVEaa announcer who left Adelaide this week to live in SE Asia with his wife and family. His craziness will be missed. It also brings to an end, the long running radio segment that Sean and Steve did together for many years, Online Insights. Steve’s putting that into retirement for a while.

Wine tasting: The wine this week was a ripper. A 2004 Padthaway Estate Eliza Sparkling Shiraz. Read the wine tasting notes.

Stories without notice:
Brett says he is playing this weekend at a bridal expo at Carclew, North Adelaide. Nigel discussed the work on the Britannia Roundabout and wondered whether it should have a new name when it is finished. Steve talked about a Liberty petrol station owner shutting off the petrol pump while he was filling petrol while using his mobile phone. Steve explained to the operator how all that brouhaha is a myth – cell phones do NOT cause petrol pump fires. Read more at snopes.com.

Letters From Abroad: Brett’s newly arrived friend, Sylvia, is back on the house hunting trail today. Nigel chipped in with a system for making a good housing location choice; this is where the term Satisficing comes from (part satisfactory, part sufficing). Brett says she wants to know how to pick a Housing Trust house so she can avoid them but the consensus was that should not be a focus.

The 4th Musketeer: Nigel Dobson-Keeffe shared his research into water prices in South Australia over the last six years. He claims that most likely due to the Desalination Plant, water prices have skyrocketed about 680% in six years, compared to the government’s prediction of 10-15% per year. He would like to know why rates have gone up so much and believes infrastructure upgrades should not be to blame. His finger is pointed at the desal plant.