Satan’s Sunday out in Adelaide 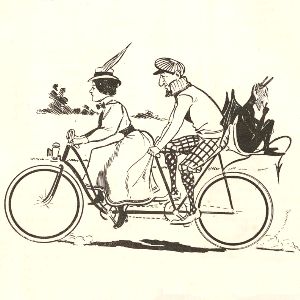 More than a hundred years ago, bicycles were a very popular mode of transport – along with horses and carts, they ruled the roads and were a popular choice of personal transportation.

However, within the Presbyterian Church in 1897, the general view was that taking a leisurely bike ride on a Sunday was a smack to the face of God. The Sabbath was intended as a day of rest and not one on which to be out galavanting, or perhaps fraternising.

The featured picture appeared in The Critic, a weekly Adelaide publication, in November 1897, and can be viewed in full here (courtesy State Library of SA).

The Critic was at one time edited by South Australian poet, C.J. Dennis.

The text in the full-size picture reads:

Yesterday the special committee of the Presbyterian General Assembly submitted their annual report on the state of religion in the colony. A schedule of inquiries had been sent round to every congregation and mission station, and the replies which had been received summarised the chief forms of Sabbath desecration.

A very common form of Sabbath desecration in town and country was carried on by parties of young men and women by means of the bicycle.

You can listen to us chat about this story in episode 39 of the show.