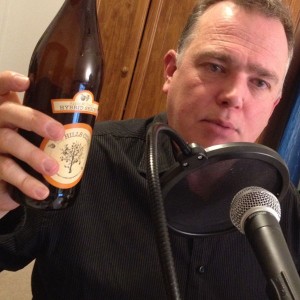 The South Australian Drink Of The Week this week (episode 013) is the range of fine ciders from Fleur and the team at The Hills Cider Company.

Something that struck us during the tasting was how ‘wine like’ the flavours were, especially the hybrid apple and ginger (which is why Brett looks so deep in contemplation in this photo with the Apple and Ginger Hybrid Series Cider.

What we meant was, you get the impression of the fruit but not with the fruit juice or fruit juice concentrate style of sweetness that many mass market ciders have.

With the Hills Cider Company ciders, you have an adult, sophisticated styling that demands attention and delivers satisfaction.

Brett made the comment that the hybrid apple and ginger was like a shiraz cabernet wine, you can tell both varieties are there but they interact with each other to create a definitive flavour, not just apple and ginger flavour.

All of this should really come as no surprise because winemaker Steve Dorman is one of the main people behind The Hills Cider Company and he says what he loves, “about making traditional cider is that I get to do a vintage every month, and I have a large range of fruit to experiment with.

“I have been playing around with different blends and oaks, and looking to connect with the history of artisan cider and the different styles throughout the world. I have a few ‘limited editions’ in the pipeworks that I’m really excited about releasing.”

As an added bonus, we loved the fact there was nothing fake added and the fruit is sourced locally.

We’ll be having some for our Boring Adelaide Christmas Dinner.