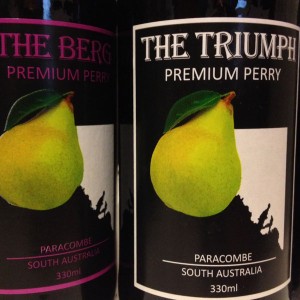 To toast Queen Adelaide in episode 015, we had some samples from Paracombe Premium Perry in the Adelaide Hills.

First of all, we got our heads around the concept of perry; it is NOT pear cider.

Perry is the drink you get when you apply the cider-making process to pears.

We started with The Berg and all thought it was juicy, sweet and pleasant, with authentic pear flavour.

Then we moved to The Triumph and our worlds changed.

The Triumph was a fine, dry perry unlike anything we had tasted before.

Seriously, there was nothing in the taste memory to compare it to, except for a deep layer of dried pear flavour.

There is a reason this drink is almost always sold out!

Finally, we tried the Ginger Beer without a name, having been warned it is so strong, and hot and gingery we will feel like we had been hit somewhere vulnerable.

We took the unprecedented action of photographing each other drinking the ginger beer, just to capture reactions for medical science. You can see the process below.

But in short, it was good, strong ginger beer with an erupting layer of heat that develops the more you drink, although not with quite the violent side effects we’d been warned about. We would say, rather, that this is a serious ginger beer.