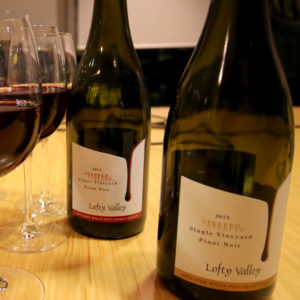 The tasting was recorded for episode 141 of The Adelaide Show, with guest Sumen Rai who considers herself a beer lover moreso than a wine lover.

Be that as it may, she took the boys to Cuba during her tasting notes, so she got into the wine tasting ‘thing’ at warp speed.

We had two vintages to try because winemaker, Brian Gilbert, had generously delivered them to us after enjoying our review of his wine in episode 134.

The 2013 struck all of us with its perfume which was not a wallflower, veritably rushing from the glass to our senses.

Steve picked up apple and leather on the palate.

Nigel got ‘dusty leather’, prompting Steve to suggest it was reminiscent of the interior of a beautifully restored vintage car with leather upholstery.

Sumen added it was more like the leather from books in an old library. Nigel concurred.

The all also noted a hint of sweetness amid these refined, ‘grown up’ flavours.

Steve then described the experience of drinking the 2013 Pinot Noir as similar to relaxing in what he imagined Brian’s stone mansion at Basket Range must be like, with roaring fires and dogs ‘near’ the fire.

It is forceful and enters the palate with gusto.

Sumen said this wine reminded her of the scent of tobacco fields from her time in Cuba.

Steve got violets on the nose and rich, almost plummy flavours on the palate.

Nigel also picked up on the more dominant fruit.

In fact, Steve said this is the gateway vintage for anybody wanting to approach Pinot Noir with confidence.

Listen to the live tasting from about 9 minutes in.

PS For the record, Brian says his supposed ‘stone mansion’ at Basket Range is more like a cottage ruin.