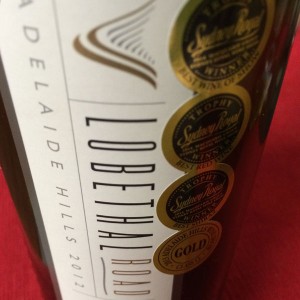 Ben Pike from Melbourne Street Fine Wine Cellars supplied us with a wine for episode 033, hailing from the Adelaide Hills.

The Lobethal Road 2012 Shiraz delighted the boys in its stately refinement.

Steve went so far as to describe it as the product of a very fine school, compared to some of the wilder wines we have tried.

Luckily, Ben was on hand to explain that this wine is a superb example of the increasingly sought-after cool climate Shiraz.

This is why it was much more balanced than some of the usual, warmer climate South Australian Shiraz (which we also love, for the record).

Ben also noted the emergence of some pepper on the palate.

And he casually dropped into conversation that not only is the 2012 vintage considered the best since 2002 but that this wine made a clean sweep of the recent Sydney Wine Show, including best wine of the show.

Although it is now getting scarce, if you can find some (Ben’s shop would be a great place to start), you will be enjoying a fine wine for an affordable, mid-$20 price tag.