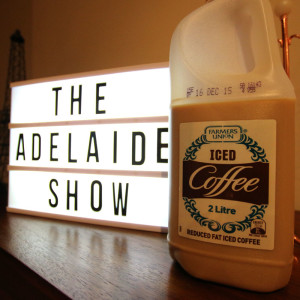 Farmers Union Iced Coffee was chosen as the South Australian Drink Of The Week by our special guest in episode 120, Melanie Usher.

Mel is well known in Adelaide as the newsreader on Nova 919 (and previously SAFM) and she asked if we might try the popular milk drink because she does not drink alcohol.

This was a moment of truth for Adelaide Show founder and executive producer, Steve Davis, because he had NEVER tried Farmers Union Iced Coffee despite it being a South Australian icon.

It was a new experience all round, because Mel couldn’t believe someone could drink iced coffee like it was a wine, as Steve did during the tasting.

Mel’s advice is to drink it chilled and she even prefers a couple of ice cubes in it during summer, which Nigel agreed with.

Steve commented that it had a medium to light body and a delicate balance between milk and coffee, with most of the coffee flavour being detected along the sides of the palate rather than across the centre.

You can hear Steve’s first ‘FUIC’ about 7 minutes in.