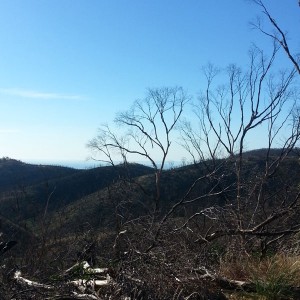 In episode 63 we went off the beaten track and featured a non-commercial wine.

It was in fact a ‘mongrel’ fortified wine carefully crafted by Bill Fradd from Beetaloo (a farm) in the state’s mid-North.

Brett brought us the wine because he was one of the volunteers who helped Bill rebuild elements of his farm that were all but wiped out in the gut-wrenching, slow-moving bushfires earlier this year.

The picture, taken by Brett, was a view of St Vincent’s Gulf from Beetaloo, only visible because the bushfire had wiped out almost all vegetation.

The wine was shared as part of a thank you night to the volunteers.

You can jump straight to the audio of our discussion here.