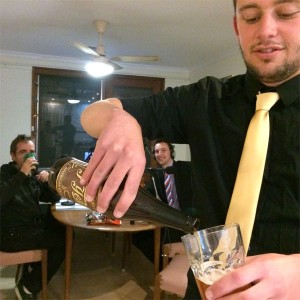 In episode 110, the boys from Big Shed Brewing Concern, Jason and Craig, swung us some F’Yeah American Pale Ale.

What a superb SA Drink Of The Week!

Dylan and Marcus from the Trifecta Cricket Association were both swept to the boundary for four, with Marcus noting some strong caramel notes on his palate.

In fact, they were so impressed, they’ve decided to name the Hit Of The Day during their backyard cricket tournament this holiday Monday, the F’Yeah!

This superb beer sits next to others in the Big Shed range including Kol Schisel (a german style pale), FrankenBROWN (American Brown) and Californicator (West Coast IPA).

Here us do our live tasting, about 6 minutes in and enjoy.