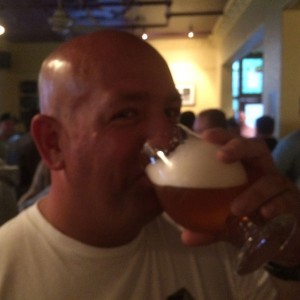 At the Wheatsheaf Hotel in Adelaide on April 2, 2014, Big Shed Brewing Concern held its launch and our crew was there to drink and to record episode 032.

Jason and Craig, the masterminds behind the brewery, are friends of Steve and Brett so it did not take any arm twisting for us to support two guys who are venturing out to stamp their mark on the profile of beer in this country.

Two drinks were favoured by our team:

Steve loved the FrankenBROWN, which was made from everything the boys had in their brewery when they launched (hence the Frankenstein reference) and is rather dark and toasty (hence the Brown reference).

As a wine drinker, Steve enjoyed the rich, malty flavours and the dry finish, almost the same finish as a big, dry, Coonawarra Cabernet Sauvignon.

Colin and Brett tucked into the F-Yeah APA (which Steve now knows, thanks to a one-on-one training session with the guys, stands for American Pale Ale).

Brett said he was more of a pilsner man but was quite taken by this lighter, aromatic beer.

You can hear Jason interviewed in episode 032 and you can also hear the Wheatsheaf crowd in the background.